Photon is a lightning fast web crawler which extracts URLs, files, intel & endpoints from a target.

160 requests per second while extensive data extraction is just another day for Photon! The extensive range of options provided by Photon lets you crawl the web exactly the way you want, which is a cool thing on its own. However, the features of Photon that make it awesome are follows:

Photon extracts the following data while crawling by default:

The extracted information is saved in an organized manner.

Here’s a secret, most of the tools floating on the internet aren’t properly multi-threaded even if they are supposed to. They either supply a list of items to threads which results in multiple threads accessing the same item or they simply put a thread lock and end up rendering multi-threading useless.
But Photon is different or should I say “genius”? Take a look at this and decide yourself.

In Ninja Mode, 3 online services are used to make requests to the target on your behalf.
So basically, now you have 4 clients making requests to the same server simultaneously which gives you a speed boost if you have a slow connection, minimizes the risk of connection reset as well as delays requests from a single client.
Here’s a comparison generated by Quark where the lines represent threads: 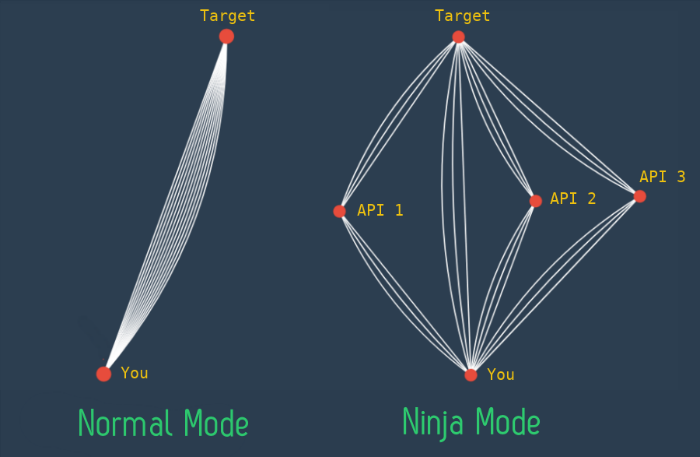 Photon’s capabilites can be further extended by using plugins.

Specifies the URL to crawl.

It specifies how much deeper should photon crawl.

It specifies the delay between requests.

The number of threads to use.

Note: The optimal number of threads depends on your connection speed as well as the nature of the target server. If you have a decent network connection and the server doesn’t have any rate limiting in place, you can use up to 100 threads.